The San Francisco Aeronautical Society is excited to announce that one of its Board Members, Angela Gittens, was awarded the Airport Council International North America (ACI-NA) prestigious William E. Downes Jr. Memorial Award on Monday November 08, 2021.

The award is named after the first commissioner of aviation for the City of Chicago from 1959 to 1975.  Shortly after his death in 1975, the award was conceived to honor his memory and is presented to an individual that has made a significant and outstanding, positive impact on airports or aviation.  Like Mr. Downes, Angela Gittens demonstrated outstanding leadership (often through adversity) and always fostered a cooperation and collaboration among all stakeholders.  She has been instrumental at leading Airport Council International (ACI) World 2008-2020, as well as the CEO of Hartsfield Atlanta International Airport dates 1993-1998 and the Miami Dade Airport dates 2001-2004 And Deputy Director at San Francisco International Airport dates 1983-1993  Angela also served on numerous aviation industry boards and committees including the FAA Management Advisory Committee, the FAA Research, Engineering and Development Committee, the National Civil Aviation Review Commission (“the Mineta Commission”), the Executive Committee of the Transportation Research Board, the Airport Cooperative Research Program Oversight Committee and the Board of Directors of JetBlue Airways. And she is a Fellow of the Royal Aeronautical Society.

Angela is well known for her pro-active drive, striving for continuous improvement of the aviation industry.  Most recently she worked tirelessly to ensure that the world’s airports had the financial and regulatory support to not only survive this pandemic but emerge even stronger and thrive in a sustainable way. 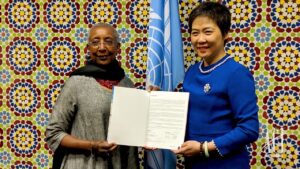 When asked about the award, Ms. Gittens replied: “this is a tremendous honor and I am overwhelmed to be in the company of such stalwarts as my mentor, Lou Turpen, who gave me the support and encouragement I needed to excel. My aviation career started at SFO and what I learned there stayed with me for the remainder of my career. SFO has continued to set the pace in the industry for quality and innovation and I am so proud to be an alumna.”  Even today, when the spotlight is shining on Angela, she finds a way to remember, acknowledge and share the award with others, confirmation of a true, accomplished leader.